"The most fun you can have with your pants on!"
(Dan Bartmann of wondermagnet.com)

Thanks to Ian Woofenden for providing many of the pictures on these pages.
These pages may be slow to load because I have gone for high resolution images in this case.
If you have a slow connection, why not go off and get a breath of air
or make a cup of coffee and come back soon.

sorry about the smell, Rani :-)

Why does the sun never come out for the group photo?

This is the bigger of the two machines we finished during the course.  Rotor diameter is 8 feet (2.4 metres).

Guemes Island Resort, where we stayed.  Chris Freitas of Ouback stops by with his wireless winch.

Robert Preus came to talk to us.  Robert is the distributor for African Windpower in the USA.  There was one AWP machine in the classroom, and another on a 150 foot tall tower across the road. The one on the tower looks pretty small.
Later, Robert gave us a talk about how wind turbines fail.  In the picture below he has a hub from a Jacobs machine.

Andy Gladish was in charge of metalworking but he can also do stick welding.

Here are Dan Fink and Dan Bartmann. They supplied the magnets, the wire and some music.

They also worked hard on the smaller of the two machines.  Here Dan Bartmann applies some subtle persuasion.

An evening session on 'magnets at work and play' 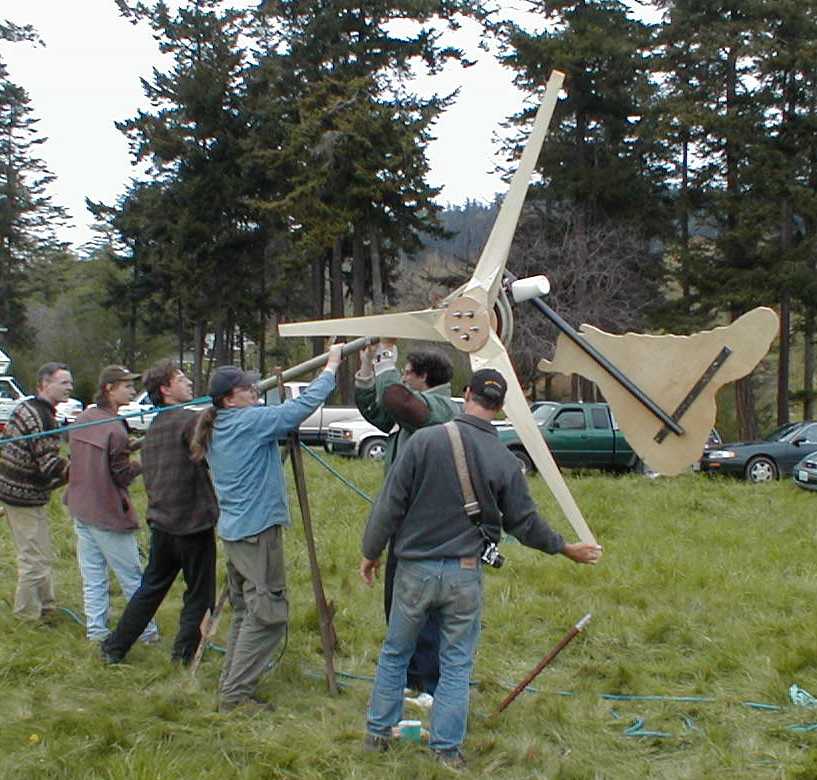 Putting the larger machine onto the tower for erection.  The tail is a map of the island.

The big machine is on the tall tower (twenty feet up but still not nearly tall enough)
and the little 4' diameter machine is on a short stand in the foreground.

Of course we had no wind to speak of and the best I saw was a 7 watt ouput.

Later we did truck testing of the small machine.  I recorded 30 amps output at 16 volts.
But to get that output I had to hold down the furling tail and we had to hit about 45 mph.
Not very scientific, but lots of fun!

In October 2003, the SEI workshop lead by Mick Sagrillo erected Win's machine at the Guemes Island store for grid intertie with some pv.

Here is the power room with the SW inverter that manages the intertie.

"What a warm, sweet feeling on a dark, ugly day to look
up and see that mill makin' watts!"
Win

sorry about the smell, Rani :-)